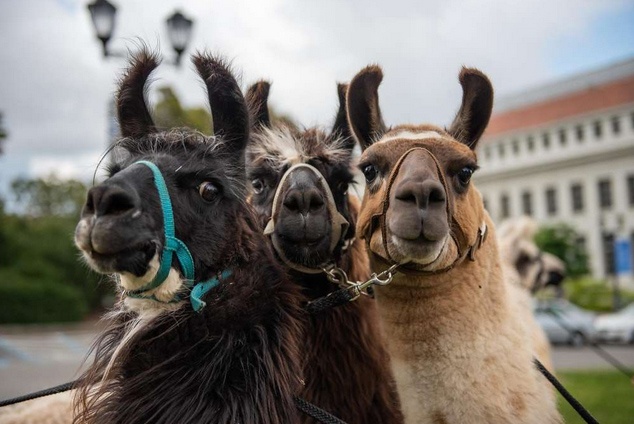 Adapted from Steve Rubinstein from the San Francisco Chronicle

Six therapeutic llamas came on Friday to bring therapy to UC Berkeley in the fourth llama confab in campus history.  A therapeutic llama may look like an ordinary llama. It isn’t. It’s been specially trained to be petted, hugged and even kissed by overwrought, stressed-out college students, who will start finals in a week. 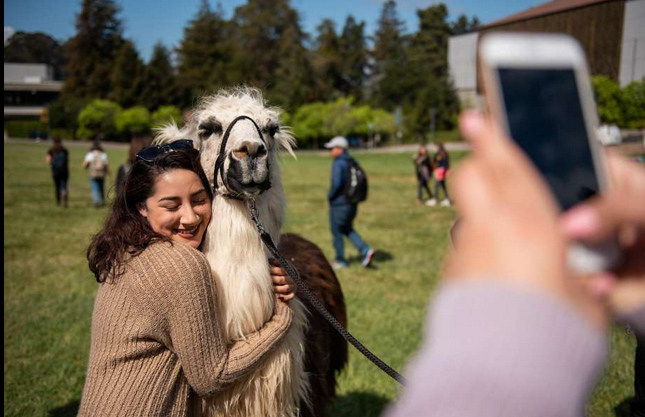 That’s exactly what happened at Llama-Palooza, as hundreds of Cal students took time off from the hitting-the-textbook thing to hang out on the lawn by the Campanile and forget such matters as calculus exams.  Petting the llama, said sophomore Camille Rubel, 18, was helping her to remember the molecular orbital diagrams of carbon atoms, which is something she’s going to need to know the week after next.

“This is very therapeutic,” she said, and her llama, Amigo, did not disagree. 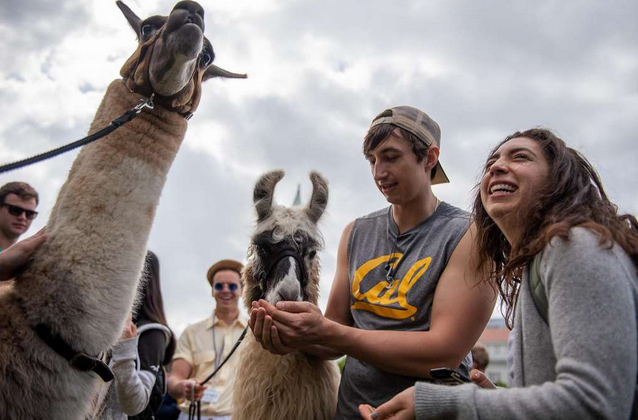 Ana Claire Mancia, a business student, persuaded the student government to part with $700 dollars so the llamas could come to the campus.  She and a handful of llama volunteers set up llama-related games, with Peruvian energy drinks as prizes. A Peruvian club was selling colorful handicrafts. There was Peruvian music and art. Most students said that their share of the $700 llama rental fee — about 2 cents per Cal student — was a bargain compared with this year’s tuition and living expenses of $28,510.

The only unhappy Llama-Palooza visitor was a German shepherd named Tucker who, without any final exams to study for, spent a good while barking at the giant creatures. His owner, senior Taylor Harvey, said Tucker was “feeling a little intimidated” by the llamas and especially by their rear hooves.

“It’s a good deal,” agreed Mancia. “The llamas do help put everything in perspective. Sometimes, students think final exams are the whole world. They aren’t. We’ve seen a deep connection between students and llamas. Llamas provide students with many mental health benefits.”
Senior Bria Lamothe, 22, agreed her mental health had improved after hugging her llama.

“It’s relaxing,” she said. “It’s a help. It’s distracting. All those are good things.”